Butter is packaged in sticks, blocks, tubs, and pats. We know what the first three are, but how much is a pat of butter?

A block of butter weighs about one pound, and a stick is a fourth of a pound. Tubs vary in weight and size. One pat of butter can also vary in size and packaging.

Butter packaging material can be foil, waxed paper inside a cardboard box, or plastic and cardboard tubs for multiple servings.

A single-serving, or 1 pat of butter, is most often found these days in a tiny plastic tub with a foil lid (like this one). It can also be packaged in a small foil-wrapped square.

Why Do We Love Butter?

The Irish poet Seamus Heaney lovingly called butter “coagulated sunlight.” American celebrity chef Paula Deen is famous for her liberal use of butter. In 2009, at the State Fair of Texas, deep-fried butter was introduced and won the prize for “Most Creative” food.

What is it about butter that makes us love it so much? Butter makes everything taste better!

Butter adds depth to the flavor of just about anything. It’s also a comfort food – the rich taste and creamy texture are comforting and lift our spirits. Whether it’s an ingredient in a recipe or spread on bread, it tastes divine.

Butter has been popular from Scandinavia to India since ancient times when it was first discovered that cows could be milked. It caught on much later in Europe, during the Middle Ages, and was initially only consumed by peasants.

The nobility didn’t eat butter until the Catholic Church declared it the only animal fat allowed on the days when meat was forbidden. As the middle class grew, they continued eating butter. If a little is good, a lot must be better.

The English became famous for dishes of meat and vegetables swimming in butter. The rest of Europe used butter in pastries and sauces. As Europeans migrated to the United States and other countries, they took this butter knowledge with them.

There are many varieties of butter. The differences in butter are caused by the type of cows that provided the milk, what the cows have been eating, and how long the milk or butter was stored before it was sold.

Butter is a favorite ingredient in baking and cooking. It is used as a spread on many types of bread. Butter is also used to prepare pans for baking or melted in a skillet for frying. Adding browned butter to a recipe will give a rich flavor to the final product.

You can even add some butter to your morning coffee and blend a trendy drink called bulletproof coffee.

Larger packages, like sticks and blocks, are good to have around if you do a lot of baking. Butter can be stored for a long time and will not go bad. But if you want to limit your butter intake or just have it in prepackaged servings, a pat of butter will do the trick.

What Is A Pat of Butter?

What is a pat of butter?

A pat of butter is a single serving of butter. It can be shaped as a square, as an ornamental curl, molded into flowers with candy molds, or can be a dollop in a tiny tub.

A few more names for a pat of butter:

Why Is It Called A Pat Of Butter?

Why is it called a pat of butter?

The name originated with the practice in fine hotels and restaurants of patting butter into small ornamental molds.

The resulting butter pieces were named “pats,” and the term stuck. These small pats could be chilled on small plates and served quickly, as needed.

Pat of butter or pad of butter?

Is it a pat or pad of butter?

They sound similar but are not the same.

A butter pat is one serving of butter.

A butter pad is a small plate used for serving pats of butter.

I’ve also seen non-stick notepads shaped like a stick of butter and called Pad of Butter. 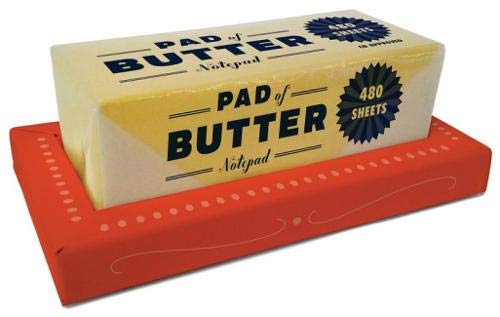 Only “pat of butter” refers to food.

How much is a pat of butter?

Like many things in the kitchen, the size of a pat of butter varies.

How many pats of butter are in a tablespoon?

There is a question of how many pats of butter are in a tablespoon.

One ounce of butter equals about two tablespoons. However, the size of what we call 1 pat of butter can vary according to packaging.

The most common pat of butter, the square, contains about half a tablespoon. Smaller pats, often the tiny tubs, are about 1/3 tablespoons.

Depending on the package size, there can be 1 to 3 pats of butter in one tablespoon.

How many tablespoons in a pat of butter?

Depending on the package size, 1/3 to 1 tablespoon of butter can be in one pat.

How many grams in a pat of butter?

How many ounces in a pat of butter?

How much is a square of butter?

A square of butter is the same size as a pat of butter.

How many pats of butter are in a stick?

Another question is about how many pats of butter are in a stick.

If you are just slicing a quarter-pound stick into even one-tablespoon pats, you will have 12 pats.

Results will vary if you are softening the butter first and making shapes with candy molds. Smaller molds will yield more shaped pats of butter.

How many calories are in a pat of butter?

Butter is delicious and makes everything better, but how many calories are in a pat of butter?

Butter is one thing we can all appreciate but in moderation. Because it can be so rich and creamy, we don’t need to eat a lot to enjoy it.

Pat of butter vs knob of butter

What is the difference between a pat of butter and a knob of butter?

A pat of butter is generally served as a condiment and is less than one tablespoon.

A knob of butter is an arbitrary amount and is used in cooking.

How much is a knob of butter?

It is generally accepted that a knob of butter is the amount needed to cover the bottom of whatever size pan or skillet when melted.

A knob is often cut off from the end of a stick without measuring it. Some people say that a knob is about the size of a thumb, but those also vary from person to person.

How to slice butter into pats?

To slice the butter into pats, you’ll need a stick of butter and a sharp knife.

I often heat my knife in a mug of hot water to make it easier.

I am collecting the questions about butter that will be answered later. Stay tuned!

How much is a tab of butter?

There is more to butter than just how much is a pat of butter. Every bite of butter tells a story of grass and sunlight. It’s a story of family and traditions. Butter has been used as an everyday food and for special occasions for centuries. Butter can stir up memories of people and places.

It can be the final touch in a chef’s masterpiece, or it can be a simple addition to a sandwich for lunch. How much is in a pat of butter? It depends on what you’re measuring. Tteokbokki is a Korean dish that comes in different variations. Koreans and people from all over the world also seem to enjoy this traditional food very much. Rice and noodles are among Korean staple foods, so they tend to make various rice dishes. Tteokbokki is one of the variations. If you pay close attention, you…

Versatile, diverse– there are lots of words to describe kimbap. It has become popular almost worldwide in recent years because of the sudden popularity of Kdrama and Kpop. Whatever the reason, you must admit kimbap is a fantastic dish. But sometimes, just kimbap may not satiate you. Or, if you’re planning a party and want…

Reheating leftover food can be a difficult task. You need to make sure the food is heated evenly without affecting the texture or flavor. There is also a risk of overcooking the food, especially if it’s something doughy like dumplings. These delicious dough pockets filled with meat and vegetables are best enjoyed when they’re still… If you have tried or like Korean food, you must have heard about the famous Korean dish tteokbokki. It is simmered rice cake that is sweet and spicy to eat. The dish is very common in Korea. Not just in restaurants, you can probably find it in any street vendor’s cart while walking down the… Edamame is a great snack. If you cook them right, you can also add them to fried rice or stir-fry dishes. This article will introduce you to some great ways to reheat leftover edamame. We hope you can create fantastic recipes with them. ContentsWhat’s is Edamame?Can You Reheat Edamame?How to Reheat Edamame in Air FryerHow…

Hard boiling or hard cooking an egg in its shell requires the least amount of skill. Simply add eggs and water to a pot and let it cook. Boiling an egg, however, is the harshest way to cook it. The boiling water causes the eggs to bump against each other or the side of the…